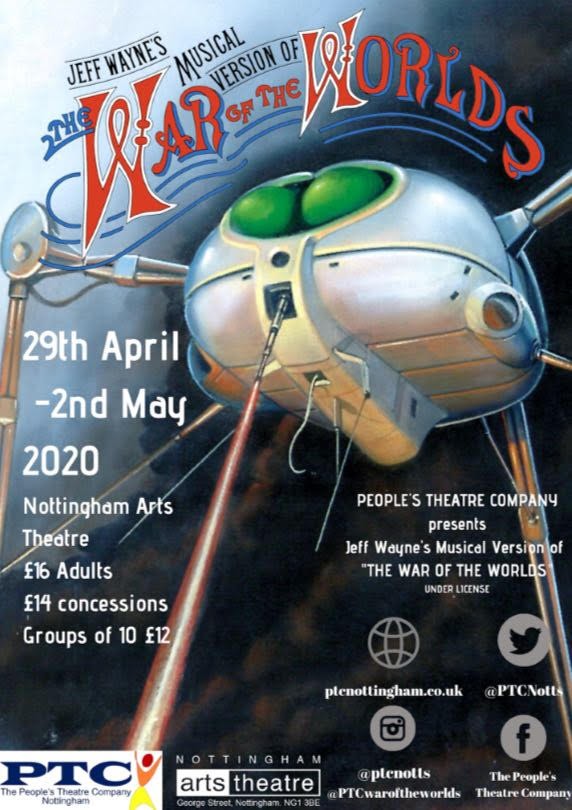 Jeff Wayne's Musical Version of The War of the Worlds

Presented by The People's Theatre Company

The Jeff Wayne musical is based on the novel by H G Wells.

The Journalist's account begins with the sighting of several bursts of green gas which, for ten consecutive nights, erupt from the surface of Mars and appear to approach Earth. Ogilvy, an astronomer convinced that no life could exist on Mars, assures the Journalist there is no danger.

Eventually something crashes onto Horsell Common. Later, hammering sounds are heard from the pit. An injured and exhausted Artilleryman wanders into the Journalist's house and tells him his comrades have been killed by Fighting Machines. They set off for London but are soon caught in crossfire between soldiers and Martians. The Journalist resolves to escape London.

The wandering Journalist discovers that The Red Weed has taken root on Earth and spread rapidly across the landscape. He encounters the Parson Nathaniel and his wife Beth. Nathaniel, driven mad by his experiences, blames himself for the invasion and believes the invaders are demons arising from human evil. Beth attempts to restore his faith in humanity.

Nathaniel resolves to confront the 'demons', The Journalist continues his journey to London. He again encounters The Artilleryman, who is planning a subterranean utopia The Journalist, upon reaching London finds it desolate and empty. Driven to suicide by intense despair and loneliness, he surrenders to a Fighting Machine but realises it is inert, the Martian inside dead.