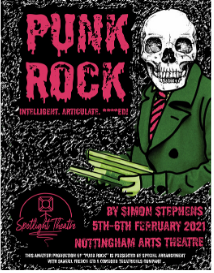 William Carlisle has the world at his feet but its weight on his shoulders. He is intelligent, articulate and f***ked. In the library of a fee-paying grammar school, William and his fellow Sixth-Formers are preparing for their mock A-Levels while navigating the pressures of teenage life. They are educated and aspirational young people, but step-by-step, the disclocation, disjunction and latent aggression is revealed.

"Everything human beings do finishes up bad in the end. Everything good human beings ever make is built on something monstrous. Nothing lasts. We certainly won't ..."

"Powerful and compelling ... evokes the twilight world of the teenager with scary vividness ..."

This amateur production of “Punk Rock” is presented by special arrangement with SAMUEL FRENCH LTD a Concord Theatricals Company.